No need to spend the night in a sleep lab to diagnose obstructive sleep apnea. The Watch-PAT is a home test that features two stickers on the chest and a wristband. Results are known the next day.

There are surgical and non-surgical treatments that can help you! Radiofrequency tissue reduction, pillar procedure, and oral appliances are all available here at North Atlanta Snoring & Sleep Apnea Center. 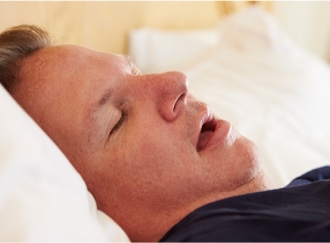 Why choose an ENT for sleep disorders?

Dr. Lawrence Weiss is a medical doctor specializing in surgery of the head and neck, specifically of the ears, nose and throat. His specific training and years of experience make him uniquely qualified to help you resolve your snoring or sleep apnea issues.

45% of normal adults snore at times. 25% snore most or all of the time, called habitual snoring.

Snoring is due to the turbulence of airflow thru an obstructed nasal passage and/or the vibration of collapsed soft tissues within the throat.

As we sleep, we descend into deeper levels of sleep, in cycles, many times each night, in order to be refreshed upon waking. As we descend into the deeper levels of sleep, the muscles throughout the entire body lose some tone, including the muscles that keep the throat open. As the throat muscles lose tone, there’s a natural collapse of the airway to some degree in everyone. If the tissues within the throat collapse too much and fall against each other, the air that we breath in forces those tissues apart, but then they fall back against one another and vibrate, causing snoring.

There is a spectrum of snoring. On one end is Benign Snoring. In Benign Snoring, the snorer is able to go thru the normal full night’s cycle of refreshing sleep. In this situation, the snoring is a social issue, which may not feel so benign to the snorer’s bed partner as he or she has to listen to the “racket” and is most likely not sleeping well.

On the other end of the snoring spectrum is when snoring is a sign of a true medical condition called Obstructive Sleep Apnea (OSA). In OSA, at some point within the sleep cycle, the tissues of the throat are falling against one another to such a degree that the air being breathed in by the patient is not able to blow the blocked tissues apart, essentially causing a lack of airflow, or apnea. This temporary “suffocation” causes our brain to make us go to a lighter level of sleep, or completely wake up, to make sure that airflow restarts. This process prevents the patient with OSA from going thru the normal cycles of sleep, which can cause multiple problems including the following:

The Diagnosis of Snoring/Obstructive Sleep Apnea requires a two-step process. An Otolaryngologist (Ear, Nose, and Throat specialist) is able to thoroughly evaluate the nasal passages as well as the mouth and throat to figure out the likely source(s) of obstruction. If OSA is suspected, it is recommended that the patient undergo a sleep test. Traditionally, this would involve spending an uncomfortable and expensive night in a hospital Sleep Lab. Thankfully, with the evolution of technology in the field of sleep disorders, Home Sleep Tests are now available in which the patient is able to have the sleep study performed comfortably in the natural environment of their own bed at a fraction of the cost of the traditional Hospital Sleep Lab. The North Atlanta Snoring and Sleep Apnea Center of Weiss ENT is proud to feature the WatchPAT Home Sleep Test. This amazing technology, made by Itamar Medical, features a lightweight wristband worn on the nondominant hand. A small probe is placed over the index finger to monitor Peripheral Arterial Tone. A small sticker is then placed over the tip of the ring finger to monitor oxygenation. Another sticker is placed on the chest to monitor body position and one above it to record snoring. Then off to sleep in your own bed! Once our patients are suspected of having OSA, they come to our office to spend approximately a half hour learning how to use the WatchPAT at home. They take the device home for their Home Sleep Test that night. Should any questions or difficulties arise during the night of the study, ITAMAR provides a 24-hour on call phone service to make sure the test is successful. The patient brings the WatchPAT back to the office the following morning for interpretation of the study. The patient is seen by Dr Weiss within a few days to review the results of the WatchPAT study and discuss treatment options based on these results and the physical exam. The Home Sleep Test may also be used after any treatments that may be undertaken to assess for the cure or persistence of OSA. WatchPAT Home Sleep Test

No one treatment for Benign Snoring or Obstructive Sleep Apnea (OSA) is right for everyone. A thorough physical exam is necessary by an Otolaryngologist to figure out the site(s) causing the obstruction leading to disrupted sleep and snoring.

Generally, the following sites are those more commonly involved in snoring and OSA:

The standard of care in treating OSA is an air delivery device called Continuous Positive Airway Pressure (CPAP). This treatment delivers air into the airway at a pressure that blows the tissues apart so that snoring and OSA are resolved. Approximately 65% of patients are successfully treated with CPAP.

Nasal obstruction is a common cause for snoring, and contributes to OSA. When the midline structure of the nose, the septum, is very crooked, a surgery called septoplasty, straightening of the septum, may be very helpful. Septal Deviation and Septoplasty

In-Office Reduction of the Inferior Turbinates

The inferior turbinates are the structures that sit on the floor of the sidewall of each side of the nose. These are the structures that swell with allergy or cold and shrink in size with the over the counter nasal decongestant sprays like Afrin. The North Atlanta Snoring and Sleep Apnea Center is proud to offer Radiofrequency Reduction of the Inferior Turbinates. Featuring the Celon Radiofrequency Delivery Device, excellent results are obtained via a minimally invasive 20 minute procedure. Turbinate Procedure Video

Treatment for Obstruction within the Throat

The use of Oral Appliances is a noninvasive treatment to bring the lower jaw and tongue forward to open up the airway when the obstruction is at the level of the tongue.

At the North Atlanta Snoring and Sleep Apnea Center of Weiss ENT, we feature the ApneaRx Oral Appliance.

For those patients who prefer not to wear an oral appliance or use CPAP and whose obstruction is due to an elongated soft palate, the Pillar Procedure is an excellent alternative. Done in the office, usually only once, with local anesthesia, the Pillar Procedure introduces small wicks into the soft palate, which cause the tissues of the palate to “tighten up” over the course of 1 to 3 months. The procedure is well tolerated in the office and patients are able to return to work immediately upon completion.

Radiofrequency Reduction of the Soft Palate with Celon

For those patients whose snoring/OSA is due to obstruction at the level of the soft palate/tonsils, the Celon Radiofrequency Device allows tightening of the soft palate without inserting material into the deep tissues. Performed via local anesthesia, this minimally invasive procedure is extremely well tolerated.

Radiofrequency Reduction of the Base of Tongue

Radiofrequency Reduction of the base of the Tongue

Find yourself waking up at night?